4 Ways to Address Sexting in the Classroom 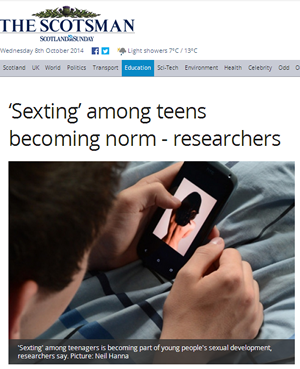 The headlines like to shock, 'teenagers in nude pic row', 'small town in teen sexting epidemic' ...again today it's being widely reported that in a recent nationwide study a mere 1 out of 5 girls are classed as enjoying a healthy self esteem, social media being in the dock yet again as the root cause. Are we to believe the hype and allow ourselves a knee jerk reaction to this growing problem or see it as not dissimilar to the ' show me yours and I'll show you mine' game from youth?

Firstly we need to understand why it's so popular even with the knowledge that in some circumstances it is against the law. 'Media hype' is correct in its suggestion that it’s practiced by a high number of teens. So, why is this the case? There are many factors that drive this behaviour...teenage behaviour experts have spoken of the natural instinct within young people to behave in a risky fashion; to explore their sexuality, discover their adult selves, break rules, feel 'naughty'... alongside this, the impact of the humble Smartphone and its never-ending options, like Snapchat and the instant Photoshop opportunities can't be underestimated. But, I think most of all it’s because of the good old craving to be told you're attractive and to feel desired, narcissism in all its glory - of which we are all not immune. All at a time when hormones are raging and there's this burning ambition to just 'fit in' and be popular.

If we delve a little deeper into other studies centred around the subject, there are other interesting finds that give us a deeper insight into the teenage mind, which fuel my ' PSHE teacher brain'. According to stats, 3 out of 4 teenagers truly believe that any pictures they send that are considered sexy or sexual will only ever be seen by the recipient. Naive perhaps, but we have to see it from their viewpoint - that it’s being sent to a person they see as being trustworthy and because they are still learning about relationships, their inexperience can be their undoing. Rather than displaying a cavalier attitude to their privacy and decency, is what is actually happening within the realms of 'normal' sexual experimentation? The survey goes on to state that out of the teens who partake in sexting, they perceive what they are doing as not being wrong and that it’s their choice... and apparently I discovered that cases of pictures being shared without permission were rare and unusual. However I'm sure that there are many cases that aren't reported due to the nature of the problem and the fact they would not want the police to get involved, or parents to find out.

I see the problems with sexting as being when young people are coerced or pressured to take and send sexual photos of themselves with the direct intension of being shared and their privacy abused. This is where the dangers lie with this issue and it can leave vulnerable individuals, normally girls, becoming victims of truly horrible experiences that can have far reaching consequences into adulthood.

So, yes, education is badly needed to make young people aware of all sides of this issue, including the law and where they stand should they take a picture, send it or worse share it. Ultimately, teenagers will always have a natural inclination toward this kind of behaviour, but at the very least we can be sure that they will be making decisions with all the facts and their complexities explained to them.

Below are some suggestions to the help you quickly get to the heart of the issue during lessons and spark classroom debate.
1. Be clear...Respect the law! Respect yourself and respect others (you could be breaking the law if you share)
2. Understand the consequences of your actions, imagine your 'worst case scenario' - think twice before pressing send. Question your actions.
3. Get the students to ask themselves 'what do I want to achieve from this?' ...could I get my desired outcome another way other than sending sexual pictures?
4. Finally, be realistic. Will sending pictures really bag the boyfriend/girlfriend of your dreams? The chances are probably not. If they respect you they will not ask you to do it. Never be talked into doing it!

If you would like to share your thoughts and ideas on how to tackle this topic with your class, please use the comment section below. E-safety Support Premium and Premium Plus members can also download related assembly and lesson plans from your dashboard.

Written by Vicki Dan on November 13, 2014 11:42
Tagged with: classroom sexting e-safety teach snapchat
Creepshots : Can the law keep up with new and emerging websites ?

It's safe to say that if you caught a stranger taking a picture of you or a part of your body you would be unhappy to say the least. You'd not be wrong to assume it was illegal or at best you would be able to have rights over the usage of any images. Well, it’s sadly not a clear issue.

Therefore, I was shocked to read this week of the increasing popularity of websites that go under the title of 'creepshots'. They operate like social networking media sites where members are encouraged to post photos that have been taken possibly without consent or knowledge of the person in them, even worse, the pictures are nearly always of parts of the body such as legs, breasts or bottoms.

According to the news this week complaints of men taking pictures of women and young girls in public have increased dramatically and it's very difficult to control or even remove the pictures from the internet once uploaded.

On researching such websites this week, firstly I had no problem finding such sites by simply searching under creepshots. Once into the hompage, I was initially faced with a set of rules and regulations that professed that uploaded pictures will be removed if taken 'up skirts' and also photos of 'obvious minors'...but when clicking on a hyperlink horribly named 'jailbait' (there was another dubious link named 'teen' ) I saw a stream of images of some young girls who I would class as under or around the age of 16 in very suggestive photos, unfortunately there were more of a concerning nature further through the slide show. Scary stuff indeed. It also appeared that the particular site I visited, even though a small registration process was necessary to upload images, anyone can view photos, which, in my opinion can fuel a user's preferences. I have read that creepshot websites are not closely monitored and have few rules, whatever the current situation it's obvious that loopholes in the law are being exploited.

Interestingly, when reading complaints about these sites, creepshot users replied with 'we're no different from the paparazzi'. So are we now living with the same threat as celebrities in the way that they fear photographers' lenses whenever they leave the house? And as we know, Heat and magazines alike have a huge following and are lucrative...the more telling or grotesque the photo the more it is likely to be on the front cover. Did we feel sorry for Hugh Grant when he was very outspoken in his views regarding press intrusion? Can we now be a little more sympathetic to celebrities calls for increased privacy laws in this country when now we are in danger of being 'papped' ourselves by a group of self titled Paparazzi?

So, where does this leave young people with these emerging threats to privacy and innocence? It all lies in educating them to be aware of the dangers and steer clear of websites that can encourage users to get hooked into viewing images which are inappropriate and potentially damaging. Does it just boil down to teaching girls and boys about the continual and ever changing dangers of social networking and incorporate into this the law, and what is legal and illegal. It isn't an easy job, and as identified above, the law seems to be one step behind the internet. This week the PSHE association have announced parliamentary inquiry into schools PSHE provision, and whether it is 'fit for purpose' in an ever changing world. Hopefully the findings will be that it should be compulsory in schools to teach about e-safety for the continual well being of our young people.

We spoke to our Digital Leaders group who discussed this trend in class and with their parents - here are their comments:

Eight Digital Leader students looked at this matter and some involved their parents to give views also. All of the students and parents commented that they thought that there was no one, particularly the Police, who would really deal with any creepy photography incident that seriously. The thought was that they may only be bothered about matters like this when a real problem has occurred and someone is hurt or wronged after the fact. When I asked if this was through experience it turned out not to be so; we concluded that this was just a perception through lack of any high profile outcomes in the media. They thought that as the media were often both blatant and sometimes covertly trying to obtain images to get a sensational story, that they were very blasé about this issue and would probably not highlight this type of story as fingers might point at their own methods.

Students commented that if someone were taking pictures near a kid’s playground then they would find it more worrisome if it was a man. I asked what their reaction would be in this instance and they said that there would be nothing they could do, they knew it would be dangerous to approach that person and that they would have to tell a responsible adult, but the pictures are by this time already taken and the photographer would be gone. Parents mostly said that they would politely challenge a person taking photographs and would be suspicious of the person’s intent. They commented that even if they were upset what could practically be done.

Parents and children asked about legislation, but could not find anything that would necessarily work when we discussed it. No one could see where there is any defining line, never-mind when that line is crossed between what is publicly decent and what is creepy or perverse …and that almost any incident could reasonably easily and very plausibly be explained away as an usual circumstance. The police would only have recourse to stake out the location and hope for a repeat incident by the same individual and then only act if the person was on the sex offenders register. If there was a reasonable excuse then what can they do? The only definite line we could see was if someone set out to covertly ‘spy’ on someone else. Placing hidden cameras and maybe even operating them remotely was a definite area that should trigger an investigation and where a line of tolerability had definitely been crossed.

While the group were unable to come to a conclusion on this matter, it does demonstrate the lack of clear legalities around this issue and the feeling that nothing can be done when it happens.

If you would like to add your comments on this topic, please do so below.