15 tips to encourage pupils, parents and staff to get involved in e-safety 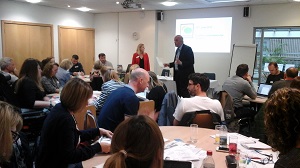 The recent E-safety Seminar held in collaboration with ChatFOSS, saw teachers from across the country coming together to discuss e-safety issues in their schools.

We heard from Henry Platten of eCadets about empowering children to embrace technology. Michael Brennan from Tootoot discussed his experience of bullying at school and how this lead to the development of their safeguarding reporting tool for schools. Tim Pinto led a discussion on the Ofsted requirements for e-safety and Alicia Coad of ChatFOSS rounded off the formal presentations with information on social media and working with parents.

To complete the day, all the delegates worked together to come up with 15 tips to help engage the whole school community with e-safety. Here are their suggestions:

An extra tip received from Mary at a secondary school in London is to include e-safety tips on student planners.

The web has changed this and parents find it difficult to keep track of the multiple accounts and Apps that their child is using. The development of technology means that children and young people can easily speak to strangers and access inappropriate content.

This is why digital parenting is such an important skill today as children need to be given rules about how much ‘screen time’ they are allowed in a day, what type of Apps they are allowed to download and most importantly the risks of talking to people online.

There is often an argument that children and young people are ‘digitally savvy’ and that they can run circles around their parents when it comes to technology. This may be true with many families, however they do lack the life experience and wisdom that makes them more vulnerable to potential grooming by others on the Internet.

So what can parents do? In the first instance, it is important that they communicate with their children about what they are doing on the Internet. Children cannot be monitored 24/7and as they grow older into their teenage years, there has to be an element of trust and independence, so that if something did happen, then they would be able to tell their parents.

Secondly, parents need to upscale their knowledge and look at sites which help them to filter and put parental controls on devices. On Christmas morning, after the presents have been opened, children will ask how you work certain toys and parents will look at the instruction booklet for help. As many devices don’t specifically come with advice on parental controls, this is where sites such as http://www.internetmatters.org/ comes in handy to look at setting controls on specific devices.

Finally, we must try and teach our children the rules about being safe when using technology and the Internet. When they are very young, we highlight safe ways to cross the road and to be careful near deep water. In the digital age, this now must be extended to enjoying the Internet, but doing it in a safe way.

Coming Soon: Our new parent online training course will be available soon. The new course will look at how children and young people use technology and the Internet, develop parent knowledge and understanding of the digital world and support them in becoming a better ‘digital parents’. Log into your E-safety Support dashboard to preview the existing staff and governor training courses and to check for product updates. 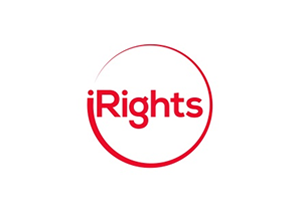 The iRights initiative aims to encourage all companies and organisations with a digital footprint to enshrine a universal standard of rights into their digital services and communications to help protect and inform young people online.

iRights has today published a report which found that, although children and young people are often presented as ‘digital natives’, in reality they lack the skills and knowledge necessary to navigate the risks of the internet or to benefit from its many opportunities.

Speaking ahead of the report’s publication, Baroness Shields, Minister for Internet Safety and Security said: “iRights gives a unique insight into how government can join with technology companies, civil society and business to make a better digital world for young people. We are using iRights in education, business and in our own services and digital communications.”

Baroness Beeban Kidron, iRights Founder and Crossbench Peer, added: “iRights would transform children and young people’s experience of the digital world. They are spending an increasing amount of time online yet fail to properly understand the internet’s many risks and abundant opportunities. We are therefore delighted by the UK government’s endorsement of our efforts, which will help move iRights from the theoretical to the practical.”

Today’s iRights report, titled Enabling Children and Young People to Access the Digital World Creatively, Knowledgeably and Fearlessly, followed a year of research by the civil society group and found that children and young people:

The report has led to a series of other announcements today. The Children’s Commissioner for England, Anne Longfield, has announced that she is launching a task force, Growing Up Digital, dedicated to improving the online lives of young people through the iRights framework.

This task force will build on iRights and work undertaken by Schillings, an international multidisciplinary reputation and privacy consultancy, which published its own analysis of iRights today, iRights: The Legal Framework. The Schillings report shows that existing legislation strongly supports the five iRights principles and that the UK can set a worldwide precedent in terms of protecting children and young people online. 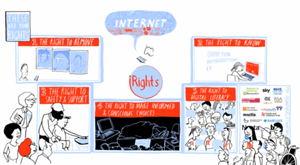 Major companies have already pledged their support for iRights and plan to launch their own initiatives to further its cause. They include Sky, Barclays, the BBFC, the Southbank Centre and Freeformers, which provides digital skills training to young people for free. Earlier this month, Scottish First Minister Nicola Sturgeon signed the framework and launched a Commission to establish how to make Scotland iRights-compatible.

iRights now has nearly 200 signatories from across government, business, technology and children’s and civil society groups. The iRights coalition is currently hosted by leading children’s charity the National Children’s Bureau.

Anne Longfield, Children’s Commissioner for England, said:
“If children of today and tomorrow are to grow up digitally, we need to be sure that the rights to protection and empowerment that they enjoy in their lives, are embedded in the new digital world they inhabit. As the legal guardian of children’s rights and best interests in England, this is of uppermost concern to me as Children’s Commissioner. I am grateful to iRights for the groundbreaking work they have undertaken in this fast developing area. I intend to build on this work to establish a new Growing Up Digital taskforce, which will launch in the autumn.”

Jenny Afia, Partner, Schillings, said:
“Our research has revealed that the law of England and Wales broadly supports the five iRights principles. The challenge is that the law isn’t being applied. Our sense is that there’s a big appetite amongst commercial entities to do the right thing by children and young people, but there is uncertainty as to what this entails in practical terms. To help companies overcome this challenge, Schillings will now embark on producing a set of guidelines that will enable companies to address this issue.”

Nicola Sturgeon, First Minister for Scotland, said:
“We believe that every child and young person has the right to grow up in a safe environment – that principle applies to the virtual world too. That is why we’re proud to support the iRights coalition and to ensure the Scottish Government is doing its bit to keep children and young people safe online.”

Ashok Vaswani, CEO, Personal and Corporate Banking, Barclays, said:
“If we are to do trusted business online then we have to have to make commitments to the communities that we serve. iRights sheds light on the way in which we should consider our interactions with children and young people. We are now working to make sure we manifest all the principles in our digital space.”

Gi Fernando, Co-founder of Freeformers and long-time iRights partner, said:
“To be a 21st century citizen, children and young people should have the right to critically understand the digital world and be confident in managing new social norms. iRights is an important step towards achieving that.”

Anna Feuchtwang, Chief Executive of the National Children’s Bureau said:
“The internet and digital technologies are fundamental parts of children and young people’s lives, shaping the world in which they live. But digital technologies are rarely designed with their needs in mind. iRights provides an empowering framework for realising the potential of the internet for children and young people so they can enjoy a safe and vibrant digital life.”

The full iRights report and framework can be found at www.irights.uk.