Young people’s internet safety films to be used as educational resources, as Childnet announce national winners of its 2017 Film Competition 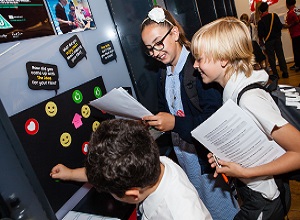 Leading online safety charity Childnet announced the winners of the eighth annual Childnet Film Competition at a private screening held for the competition finalists and industry guests at the British Film Institute on London’s Southbank.

Judged by a panel of experts from the BBC, BBFC and the BFI, the two winning schools and the four other finalists will now see their films used as internet safety resources to educate other young people about how to ‘Be the change’ and use the internet positively and safely.

The Childnet Film Competition was founded in 2010 to harness the positive role of peer-to-peer education and provide a creative and inclusive approach to empower and inspire young people aged 7-18 to use technology safely, positively and creatively.

Through the process the young people create valuable resources to educate their peers about staying safe online and develop their own understanding of what it means to be a good digital citizen.

Will Gardner, CEO of Childnet, said:
“The Childnet Film Competition is a great opportunity for young people to showcase their creative skills by creating engaging and educational videos to spread key online safety messages. The standard of entries this year has been exceptionally high and it’s clear to us that these young people are really passionate about making the internet a better place for all. All of the finalists’ films will be invaluable resources to help educate other young people about online safety.”

Childnet Education Projects Officer, Becky Nancarrow, said:
“This year’s Film Competition theme, ‘Be the change’, was all about inspiring young people to think about how they as young people can change the way that they use the internet for good. Today we not only saw the time and dedication that has gone into creating these films but the passion young people have for creating a better internet for everyone. It’s amazing that the young people’s films will continue to have an even wider impact, as they become resources for schools and youth groups to use”.

With over 127 entries from across the two categories; primary and secondary, entries ranged from animated films, to dramas about cyberbullying, to a news story about the positive uses of the internet. 6 schools attended the finalists’ event at the BFI in London before seeing their films on the big screen.

The winning films from the Childnet Film Competition can be viewed here: www.childnet.com/filmcompetition

‘The film competition puts online safety into a practical setting, in school or at home children don’t always get it, but putting those messages into a film they get into it and understand it more because it’s encouraging them to do something for themselves; something that’s big, that other people will see, and something that’s fun.’ – Teacher

‘I think it’s a great way of teaching children how to be safe, because it’s also a fun way of being in a competition, so it’s competitive. Through the competition I learnt that even if you do something wrong you can always find a way to make it better’ - Young person, primary category winner

‘I think this competition is really good for teaching people about online safety, on top of that we had a lot of fun doing the video! It took us a few hours and overall the experience was really good for us, and today was just the highlight’ – Young person, secondary category winner

This week there have been a string of reminders in the news about the risks young people are exposed to through selfies, sexting and sextortion.

Just a week ago, news reports announced that the College of Policing was advising that not all cases of sexting should be reported as a crime. To avoid criminalising young people for inappropriate but generally naive behaviour, the report suggested that a ‘common sense’ approach be taken particularly in cases where the images are self-generated or obtained with consent. While the new advice has been largely well received, it remains to be seen how this will protect those involved, when a self-generated image gets shared beyond it’s intended recipient for example – and who has the responsibility for deciding what should and shouldn’t be reported.

A few days on, and a new online challenge emerged – the one finger challenge. This, the latest in the ‘online challenge’ genre, encourages people to take naked selfies in a mirror, using one finger to cover up their privates. It’s easy to see how this ‘challenge’ could be attractive to young people. It’s also easy to see how it can lead to regrettable and potentially upsetting situations for those involved at a later stage. There would no doubt be a considerable amount of peer pressure to get involved in the ‘challenge’, which could also lead to bullying for both those who do and do not take part.

24 hours later, Jeremy Hunt announced to the Commons Health Committee on suicide prevention efforts, that children should be blocked from texting sexually explicit images by social media companies. Mr Hunt urged technology companies to use software to identify and prevent inappropriate images being sent by under 18s. This recommendation has come under fire, suggesting that this form or ‘censorship’ could do more harm than good. And surely, this blinkered approach to an out-right ban on sexting for under 18s conflicts with the earlier advice from the College of Policing, who seemingly have accepted that sexting is part of current youth culture.

And lastly, on the same day, the National Crime Agency (NCA) reported that sextortion has increased. Sextortion is a form of blackmail, where victims are coerced into performing sex acts on webcams by fraudsters. The victims are then blackmailed with the footage. A substantial proportion of victims are aged between 11 and 20. This is a relatively new crime, but has already been linked to four suicides in the UK including one teenage boy. In response, the NCA have launched a campaign to give advice to actual and potential victims.

So, once again, these varying news items have brought to the forefront the issues surrounding the sharing of personal images online. The suggestions that have been made are likely to have mixed reaction and indeed mixed success. But ultimately, they all remind us that teaching children about these risks, must be embedded in online safety education.

Opinions will vary on the matters raised in these news reports and we welcome your thoughts using the comments section below.

Thousands of digitastic families set to descend on the Digital Kids Show this October half term at EventCity, Manchester 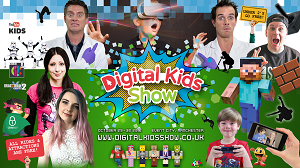 If you combine an awesome day out that teenagers and toddlers can enjoy with a much needed dose of coding, STEM, digital toys and e-safety advice, what do you get? THE DIGITAL KIDS SHOW!

On October 29th & 30th, thousands of Minecraft, gaming, YouTube loving children and parents will gather at EventCity for a day out like no other. Split across five zones, the event will showcase an unrivalled array of events and activities all included in the ticket price, making it one of the best value days out of the year.

Dads will love the Ferrari F1 Simulator and Bandai Namco’s Project Cards on Oculus Rift will bring out the Lewis Hamilton in anyone! There are prizes for the fastest lap in the next generation Scalextric Arc Air family tournament and if that’s not enough car action, 5 -17 year olds can take part in driving lessons in REAL cars – great fun and an amazing way to instil road safety from an early age.

Everyone dreams of launching the next big thing and if you are a budding app inventor or engineer then this is the show for you. The show has lots of activities to ignite the imagination and parents can get involved with kids as they get creative with robots, coding workshops and STEM toys and prepare them to be wowed by the cool Science Shows in our purpose built Explorer Dome.

E-Safety and Anti-Bullying workshops from the Diana Award and Internet Matters are an essential part of the show to help you keep your kids safe online and inspire them to be responsible digital citizens. Meet our friends from YouTube Kids and CBBC who’ve got some awesome surprises for our Digital Kids.

The Digital Kids Show also features some of the UK’s biggest YouTubers including LDShadowLady, AmyLee33, Ashdubh, Tomohawk, SmallishBeans & EthanGamerTV amongst others. They will be doing Meet & Greets and live shows on the stage. They will be joined by CBBC favourites Dick & Dom and BGT Finalists Mythical PSM and Boogie Storm!

Commenting on the event Aisha Tilstone said: “The Digital Kids Show is set to be the highlight of the October half term. We have everything every gamer needs to know right now and an insight from some of the industry’s leading lights. Even if gaming isn’t your thing it’s set to be an amazing day out for all the family. There’s so much on offer for everyone and the leading Minecraft players are sure to be a hit as they will be meeting fans and telling them all about the secret of their success. There is also an underlying message of Internet safety with a specific zone dedicated to it. This comes on the back of a recent report from OFCOM* which highlighted that there has been a fall 2015-2014 from 83% to 78% in the number of parents who trust their children to use the internet safely.”

The Digital Kids Show will be taking place 29th and 30th October at Event City. Visit www.digitalkidsshow.co.uk to find out more.