Young people in the UK, Hungary and Denmark have come together to tackle online sexual harassment and what they need from adults to help them to put an end to it.

‘Support us every step of the way, even if you think we may have done something wrong’ – young person from Denmark

Our research found that 51% of respondents aged 13-17 years said they have witnessed people their age circulating nude or nearly nude images of someone they know, with 10% of UK teens receiving sexual threats online. However young people in the UK said that they were more likely to ignore online sexual harassment than to speak to their parents or carers, with 49% not telling their parents as they were worried that they would then stop them from using the internet.

This film is designed to inspire change among young people, so that they feel empowered to step up to online sexual harassment, whether that is through reporting to social media, the police or a trusted adult.

Will Gardner, CEO of Childnet, and coordinator of Project deSHAME said:
"This film is a direct call to action from young people to put an end to online sexual harassment. We know that young people are passionate about making a real difference online and this film will act as an inspiration for those who watch it. The power of this film is that it gives us the unique opportunity to hear directly from young people about what they need from the adults in their lives, whether that is their parents, carers, teachers, youth workers and as well as the internet industry. It’s clear that all of us must act now to put an end to online sexual harassment.”

What young people want adults to do

During the creation of this film the young people told us what they wanted adults to do if a young person came to them after facing sexual harassment online. This is what they said:

56% of young people in the UK said that embarrassment was the main reason they would not report online sexual harassment. Project deSHAME has worked with young people and professionals to develop practical resources to instigate open and regular conversations about this issue.

Resources to help parents and carers

To help parents and carers to support their children with some of the issues raised in this film Childnet have created a new resource outlining further information about sexting.

This ‘Hot Topic’ contains statistics about sexting among young people, answers some FAQs that parents may have and then breaks down guidance for parents into age appropriate sections, including tailored advice for:

There is also guidance to help parents who discover that their child’s nude image has been shared online.

Written by Childnet International on May 24, 2019 09:10
Tagged with: sexting online childnet
Selfies, Sexting and Sextortion

This week there have been a string of reminders in the news about the risks young people are exposed to through selfies, sexting and sextortion.

Just a week ago, news reports announced that the College of Policing was advising that not all cases of sexting should be reported as a crime. To avoid criminalising young people for inappropriate but generally naive behaviour, the report suggested that a ‘common sense’ approach be taken particularly in cases where the images are self-generated or obtained with consent. While the new advice has been largely well received, it remains to be seen how this will protect those involved, when a self-generated image gets shared beyond it’s intended recipient for example – and who has the responsibility for deciding what should and shouldn’t be reported.

A few days on, and a new online challenge emerged – the one finger challenge. This, the latest in the ‘online challenge’ genre, encourages people to take naked selfies in a mirror, using one finger to cover up their privates. It’s easy to see how this ‘challenge’ could be attractive to young people. It’s also easy to see how it can lead to regrettable and potentially upsetting situations for those involved at a later stage. There would no doubt be a considerable amount of peer pressure to get involved in the ‘challenge’, which could also lead to bullying for both those who do and do not take part.

24 hours later, Jeremy Hunt announced to the Commons Health Committee on suicide prevention efforts, that children should be blocked from texting sexually explicit images by social media companies. Mr Hunt urged technology companies to use software to identify and prevent inappropriate images being sent by under 18s. This recommendation has come under fire, suggesting that this form or ‘censorship’ could do more harm than good. And surely, this blinkered approach to an out-right ban on sexting for under 18s conflicts with the earlier advice from the College of Policing, who seemingly have accepted that sexting is part of current youth culture.

And lastly, on the same day, the National Crime Agency (NCA) reported that sextortion has increased. Sextortion is a form of blackmail, where victims are coerced into performing sex acts on webcams by fraudsters. The victims are then blackmailed with the footage. A substantial proportion of victims are aged between 11 and 20. This is a relatively new crime, but has already been linked to four suicides in the UK including one teenage boy. In response, the NCA have launched a campaign to give advice to actual and potential victims.

So, once again, these varying news items have brought to the forefront the issues surrounding the sharing of personal images online. The suggestions that have been made are likely to have mixed reaction and indeed mixed success. But ultimately, they all remind us that teaching children about these risks, must be embedded in online safety education.

Opinions will vary on the matters raised in these news reports and we welcome your thoughts using the comments section below. 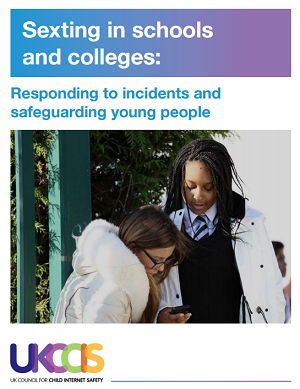 In August, the UK Council for Child Internet Safety (UKCCIS) released a guidance document for schools on dealing with ‘Youth Produced Sexual Imagery’ (YPSI) or more commonly known as ‘sexting’.

Many children and young people send inappropriate images as they see it as a form of ‘flirting’. Many do not realise that it is against the law to create, send and share indecent images of a person under the age of 18. The danger is that these images will be harnessed by adults and once they are in the possession of unscrupulous individuals, young people could be coerced into sending more images.

The 61 page document looks at the criteria that schools or colleges need to consider before making a referral to the police or social care about an incident. The guidance has been written in consultation with a number of agencies including the National Police Chiefs Council and Department of Education. The aim of the guidance is to support the Designated Safeguarding Leads(DSL) in their decision making when dealing with a YPSI incident. In recent months a number of police forces have highlighted concerns of schools referring incidents which do not constitute a police investigation.

In brief, the key points of the guidance are:

The guidance offers information for schools on teaching about ‘sexting’ in the curriculum and has links to different resources which can be incorporated into PHSE schemes of work. In addition, there are sample questions that can be used with young people involved in YPSI incidents. The guidance also provides information for schools and colleges on appropriate measures for deleting ‘indecent’ images and ways in which to talk to students involved in a YPSI incident.

The guidance is important for primary, secondary and post 16 settings and DSL’s need to look at updating their policies and training staff on the new guidance and should use it in conjunction with the updated ‘Keeping Children Safe In Education’.

The full report can be downloaded here

E-safety Support Premium Plus members can access resources on Sexting and SRE from their dashboard. Additional resources on Healthy Relationships can be obtained from our sister site - Teaching Resources Support,

This article was written by E-safety Consultant, Tim Pinto, who is currently running a series of YPSI Briefings around the Yorkshire region. To find out more, visit www.esafetyoffice.co.uk