Buying new tech for your children this Christmas? Don’t forget about online safety 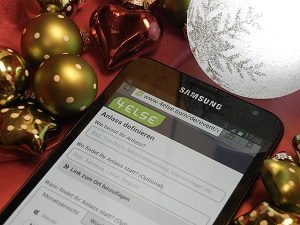 It’s that time of year again, and with the Christmas shopping well under way (at least for the prepared) many of us will be buying digital devices for children, with technology continuing to feature high on those wish lists for Santa.

This year’s top gaming consoles include the Xbox One X, which was released on November 7th with its timing (just ahead of Christmas) being no coincidence. It retails for just under £450, but if Microsoft’s price tag turns you off, then there’s always last year’s Sony PlayStation 4 Pro, which is available for just £300.

Children’s fascination with tablets doesn’t seem to be waning either. Whilst sales of adult tablets have continually declined over the last three years, specially designed tablets for children under ten have remained popular. This year sees the Kurio Tab Advance and the LeapPad 3 on the recommended lists. These give parents the reassurance of a 'safe' web browser or no Internet access and games and pre-loaded apps which are appropriate for children.

It’s when children reach the age of ten or eleven that the desire for more sophisticated technology sets in. Young people may well become frustrated when they can't get the same games or apps as their friends have on Android or iPad. Devices such as the Amazon Fire 7 offer a happy medium, allowing parents to set up password-protected profiles so they can give each child access to only the books, games and apps they want them to see. But what happens when children reach an age where they want to interact with their friends online? Games consoles have always been highly targeted at the teenage market. Once designed solely for playing games, consoles are now connected to the Internet to allow a more interactive and collaborative experience. Consoles today don’t just allow gamers to play games with others, but also allow them to exchange photos, engage in live messaging and even ‘host’ parties online.

Despite being very different devices, games consoles and tablets carry similar risks for young people. A recent study of 11-16 year olds held by Kaspersky made for interesting reading. Whilst 23 percent had been asked personal or suspicious personal questions online, as many as 20 percent said that they trusted the gaming platform so much that they would see no problem meeting contacts from it in real life. Nearly a third of the children in the study said that their parents had no idea who they talked to when they played games.

In the UK, a similar study held by the Oxford Internet Institute (OII) at Oxford University — which analysed Ofcom data from 515 homes with 12-15 year olds — found that eight percent of those who had been interviewed had been contacted by strangers. Four percent said they had encountered another person pretending to be them online and two percent had seen something of a sexual nature that had made them uncomfortable. Their parents were also interviewed about whether they had used technical tools to control or manage their child's access to online content. Only one-third of the parents said they used content filters, with two-thirds (66%) saying they had not. One quarter (24%) of the parents did not know or were unaware of the filter technology at the time of the interview.

But whilst filtering might seem like a quick fix, one that can be ‘switched on’ and then forgotten about, questions still remain about whether this is truly an effective way of protecting young people. Even the best filters are never completely watertight, and on the flip side, some filters can be so strictly configured that they can over-block, preventing teenagers from accessing helpful content on topics such as sexual relationships or drug and alcohol abuse.

Rather than prioritising Internet filtering, the OII study (amongst others) suggests we should place greater focus on educating and supporting teenagers about using the Internet responsibly, with emphasis on how teenagers manage online experiences that make them feel uncomfortable or scared. Parents should start the conversation about online safety at a young age, so more serious conversations about risk can be discussed as the child gets older. Once young people know that their parents understand what can happen online, it gives them greater confidence to approach parents for an open dialogue about any concerns and bring to light any negative experiences they might have had.

Does your school hold regular workshops with parents about online safety? The run up to Christmas can be a great time to have these conversations before the winter holidays. Engaging parents provides a more holistic approach to online safety, building a better school community and one that takes a proactive approach in helping families stay safe, as recommended by Ofsted. 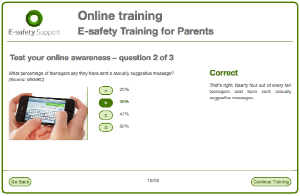 If you’re looking for resources to help you engage parents, E-safety Support offers a number of resources; including parent packs, e-safety factsheets and guidance documents specifically for parents. There is also an online training course designed as a simple introduction to e-safety which will provide some much needed information to help parents start to understand possible e-safety problems and give them a foundation for making decisions about technology usage within the home.


To preview the resources and training courses available, join our free membership service

With Christmas just around the corner, many children will be hoping for the latest iPhone X, or indeed their first ever phone. Two weeks away from schoolmates and with a new device at their fingertips, children are vulnerable to making online mistakes as they excite in the joy of their new gadget and the opportunity to connect with their friends.

These gifts open them up to a whole new world of fun, opportunity and risk.

These digital kids are no different to children of old – they crave attention and they want to push boundaries and what better way to do it than through social media? As their family sit relaxed enjoying the Christmas TV specials are they aware of just what their children are doing online?

Schools throughout the country offer excellent online safety education and strive to use new and innovative ways to keep the children engaged on the topic. However once children are in the comfort and safety of their own home, perhaps bored due to the lack of structure the holiday brings, they can start to take risks.

By the time the term begins, pastoral staff can find themselves with a queue of children and parents all concerned and upset about social media incidents that have taken place in the holiday period and spilled into the classroom. There is only so much the school can do – parents need to understand that giving a child a device is opening a can of worms.

A step by step approach is needed, no child is allowed to jump on a plane to New York unaccompanied – freedom is given gradually over time, starting with trips to the local shop, then town and so on. Yet with the online world it tends to be all or nothing. Parents need to engage with the online world and replicate the step by step approach to parenting that occurs offline.

As teachers all you can do is signpost your families – they need to know that as the world evolves so does the online offering. Filters on wifi are an easy win for parents, this is not about not trusting your child when they search for things, more ensuring they are protected from images they most likely do not want to see. ChatFOSS is also a useful app – it enables families to communicate with each other in privacy without contact from others – and has an age rating of 3+. It is a great environment for children to practice sending messages and photos.

Whilst teachers strive to educate children about the online world and the opportunities and risks it brings with it, parents also need to be engaged. Easier said than done but it is time parents realised the responsibility of online behaviour has to lie at the door of the parents. Schools can be helpful and offer advice and training, signpost their parents to useful apps such as ChatFOSS and websites such as Internet Matters, but without the parents being involved children will learn the hard way – online mistakes are permanent and there for whole world to see.

E-safety Support would like to thank Alicia from ChatFOSS for her thoughts on this topic. For more information about the ChatFOSS service, click here